Believe in yourself and don't be discouraged by failure, is the message that Sara Al Madani wants to get across to female entrepreneurs all over the UAE.

The entrepreneur and fashion designer, who is also a board member of the Sharjah Chamber of Commerce and Industry, spoke to Khaleej Times about how the government today increasingly supports women in the business sector, but that there aren't enough women taking advantage of those opportunities.

"I think the initial piece of advice I would give women starting their own business, is to believe in themselves. If you don't believe in yourself, any other hurdle will discourage you from continuing," Al Madani said.

"Don't be scared to fail, because failure makes you who you are. Always learn from your mistakes; they aren't there to hurt you, but to actually strengthen you. Be kind and share any knowledge you have with the people around you. I firmly believe that when your surrounding grows, you grow with it."

Al Madani's entrepreneurial journey started when she was just 15 years old. She recalls how she wasn't initially interested in fashion, but was struck with the idea of modernising the abaya.

"I wanted women to be able to wear the abaya, maintain their modesty, but also be extremely fashionable," she said.

Al Madani further recalled how she didn't want her parents to fund her business. "I wanted to be able to grow it bottom-up by myself. I didn't take any financial support from anyone, but instead found other ways to make money -- by selling my electronic products and sweets that I would buy initially.

My brand has come a long way from the initial store I started in Ajman. I now have my own store near the Sharjah Ladies Club and my brand has changed from being called Rouge Couture to Sara Al Madani Fashion Design presents Rouge Couture."

A look at Al Madani's journey reveals a number of colourful milestones: the elegant fashionista has been appointed as a brand ambassador for Nivea and Natura Bisse Middle East, won the prestigious Arab Woman Award in 2012, and has had her stunning abayas presented to celebrities like American pop star Madonna.

Contemplating her successes, Al Madani reflects that women entrepreneurs are still faced with a number of challenges. "I think there is still not enough support for women, from family and society. This needs to change. In addition, I think many women fear failing, but this is not just women, as it generally happens for entrepreneurs who are unwilling to take risks. For a number of women, if it is not a need or necessity to survive, it becomes more of a hobby and this won't make it sustainable. You need to fully commit to the job wholeheartedly."

Asked about the evolving business landscape in Sharjah and the upcoming launch of the shjSEEN campaign, which will highlight the cultural enrichment in the city, she said: "The culture and business community are at the heart of our movement. Entrepreneurship is on the rise, and Sharjah wants to let business owners know that we are a competitive and viable option as a business hub."

Al Madani, who is a member of the shjSEEN board of trustees, noted that businesses need to consider two things -- access and costs.

"Having a business hub in Sharjah means that you are 15 minutes away from Dubai, and just 1.5 hours away from Abu Dhabi. Now, consider that operational costs are far lower in Sharjah. These are important considerations for any business and something that makes Sharjah an attractive option."

"Sharjah already has a diversified business portfolio, what we are doing now is growing it. The SME sector is particularly important given that it makes up the largest category of businesses in any economy," Al Madani explained.

"Globally, there is a disparity between women and men in the workplace. Women entrepreneurs are even scarcer. As part of our incubation programme, we hope to give special attention to how we can help both entrepreneurs grow." 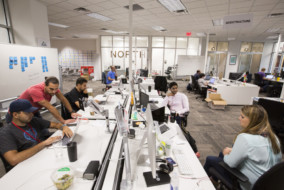