WWR Article Summary (tl;dr) President Donald Trump's proposals to eliminate or renegotiate the North American Free Trade Agreement, assign a 20 percent or higher "border adjustment tax" on Mexican imports and construct a border wall have left many Mexican companies struggling with the uncertainties of the future.

Along the winding, craggy roads of the industrial park in this city, workers walk from their bright colonias to the gray, concrete slabs of manufacturing plants, many of them American, where they work.

Later in the day, plant managers retire to their gated homes -- a community of people who were lifted into wealth through the city's industrial growth aided in part by American exports.

All eyes today, from the workers to the owners, the local vendors selling cups of elote on the street to the venture capitalists in their high-rise firms, are watching each tweet, comment and executive order signed by President Donald Trump.

Monterrey is known as the NAFTA capital, and many of the 4.5 million people here wonder how a country so familiar to them -- just three hours away by car -- could take them for such an unexpected ride.

Trump's proposals to eliminate or renegotiate the North American Free Trade Agreement, assign a 20 percent or higher "border adjustment tax" on Mexican imports and construct a border wall have left many Mexican companies struggling with the uncertainties of the future.

As the leading industrial hub of the country, Monterrey is on its way to becoming a flash point in the binational debate.

"We talk to companies every day and it's a changing story, but there is a lot of concern especially in Mexico right now," said Joseph Chapa, vice president of the United States-Mexico Chamber of Commerce.

Already, the social anxiety and mistrust has struck a nerve with many Monterrey businesses. Some members of the Mexican Entrepreneur Association in Monterrey said community business leaders feared retribution if they spoke with a reporter on the issue.

Nationwide, the people of Mexico are taking preventive measures to protect against potentially aggressive U.S. policies.

Mexican President Enrique Peña Nieto has scheduled a 90-day conference period with the country's Senate and private sector to discuss a plan for NAFTA.

He also re-launched the "Hecho en Mexico" initiative to encourage the purchase of Mexican-made products, and everyday people have been boycotting American companies like Walmart in favor of homegrown grocery stores like Soriana.

Weighing heavily on Mexicans is the plunge of the value of the peso, which has mirrored the downward spiral of U.S.-Mexico relations since Trump's election Nov. 8.

Trump's border restrictions leave some visa-holders worried about their freedom to travel in and out of the United States.

Another concern is a fear that Trumplike populism could gain traction in next year's presidential election.

Politics for now seems to be pitting the neighbors against each other.

Peña Nieto canceled a trip to meet with Trump, after Trump tweeted about making Mexico pay for a wall. Trump reportedly told Peña Nieto in a call last weekend that he'd send U.S. troops to knock out the "bad hombres" in Mexico, though some say the remarks were in jest.

For South Texas cities like San Antonio, whose roots are intricately intertwined with that of Mexico and, in particular, its sister city Monterrey, the political tension contrasts with their deep-seated cultural and commercial ties.

San Antonio and Monterrey used to be connected by a passenger train and while that is no longer, they remain connected through a similar cultural history. Linder moved to San Antonio from Monterrey six years ago to establish another base for his company OpCom Media Group because he knew the transition would be a "soft landing."

He said the social ramifications of some of Trump's policies are affecting the country's economics, and vice versa.

It's, 'We are neighbors but I don't want you to look at my home.' And because of that, things are already happening with the whole economic ecosystem."

'On standby' A painting of George Washington kneeling by a horse in prayer hangs on the wall of Felix Cardenas' office. The venture capitalist has been an ardent fan of the United States and its first president for years, having obtained much of his education there.

"We've been friends for so many years, good neighbors. In 1994, when NAFTA was finally executed, it wasn't just to be good neighbors, but Canada and Mexico were pulling our destiny together. We were forming an economic block," Cardenas said. "So that's what we encourage our American friends and business associates to do -- see us as partners. A symbiotic, mutual relationship."

And those kinds of relationships--and the jobs they fostered--are what's at stake, he said.

When NAFTA began and tariffs essentially were eliminated between Canada, Mexico and the U.S., small businesses shuttered doors in Mexico, unable to keep up with the larger companies -- many American -- that moved in and made products for less cost.

Thousands of jobs were lost, but thousands more were created in manufacturing plants, to the point where it largely was regarded as a net gain.

While Cardenas might see the United States as a friend, he said he's concerned the feeling isn't mutual.

Trump calls NAFTA "the worst trade deal maybe ever signed anywhere." U.S. imports today outweigh exports to Mexico, contributing to a deficit of $58.8 billion in 2016. It's not the highest it's been -- in 2007 the deficit reached $74.8 billion -- and experts say it wasn't the movement of companies but technological advancements that caused a lot of manufacturing jobs to close.

As North American trade swelled after NAFTA, so did business ties between Texas and the Mexican border state of Nuevo León and its capital of Monterrey. Now, produce and automobile parts are exported to the U.S. while Texas-based companies like H-E-B have expanded to Nuevo León.

Mexico is the United States' second-largest export market and in 2015 Texas imported more than $84 billion worth of goods from Mexico, making up 33 percent of the U.S.' total imports from Mexico. About 80 percent of Mexico's exports are U.S.-bound.

The possibility of gutting that expansive, intricate trade relationship has shaken business leaders on both sides of the border.

"The biggest issue is that there's an absolute uncertainty about what will happen. I think this is the most dangerous," said Zita Horvath, an associate professor at the EGADE business school and corporate lawyer for private equity and wealth companies. She said investors have approached her "very concerned" over the United States' new protectionist direction.

Trump has been adamant about companies staying domestic. Carrier, an American air conditioning company, and Ford Motor Co. both reversed plans after Trump derided their intents to move to Mexico.

One businessman who's in charge of international exports for a company that sells the majority of its products to the United States said he's halted all exports until he gets more clarity of the future of U.S and Mexico trade relations.

He did not want to publish his name for fear of retribution from U.S. officials.

"Officially, we've stopped everything. It's like when you're in a recession -- everybody's stopped their decision until things clarify," he said. "We're on standby."

He wanted to put his firm's first office in San Antonio. But once Trump was elected and then inaugurated, he decided it would be too risky to deal with the United States. He said he picked Texas because he used to think that it had a lot in common with Nuevo León. Could The Coronavirus Reset Society? Questions We Should Be Asking About Postpandemic Life Your Social Media Activity Could Get You Fired. Is That Legal? 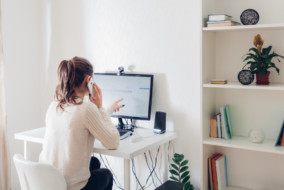