WWR Article Summary (tl;dr) Barbie Jackson and Brandy Hamlin were interested in opening a restaurant in downtown Burlington. They soon realized, Burlington was without a doughnut shop. Soon, with help from the "Greater Burlington Partnership's entrepreneur competition" "Wake N'Bake" was officially born.

Whether you're craving southern cuisine, a taste of Portland, the long-absent Burlington spudnut or a daytime mimosa, you can find it downtown at Wake N' Bake Breakfast Co.

Co-owners Barbie Jackson and Brandy Hamlin opened the restaurant June 14 inside the former tire shop at 713 Jefferson St. The two won the Greater Burlington Partnership's entrepreneur competition for their business plan for the restaurant in May.

Jackson, a Burlington native, and Hamlin have owned businesses together for the past 13 years, starting with a bar called Beer Belly in Georgia.

"We've been around so many cool food places. We lived in Charleston, Atlanta, Portland. Greenville, South Carolina, is a real big food place now, and we just felt like this town needed a few more options and maybe some food from those other areas to give a variety," Jackson said.

Included in that variety is chicken and waffles, a brie and baguette plate, an array of biscuit and croissant dishes, omelets, Hawaiian bread French toast, sandwiches, wraps, salads and burgers.

And then there are the spudnuts.

Jackson and Hamlin moved to Burlington in September and decided to look into opening some kind of daytime restaurant that also could serve as an entertainment venue. It was in winter they noticed the "For Lease" sign in the tire shop's window.

"I could tell downtown was having a surge. Things were moving, but I just wanted to help any way we could to just make some more fun and kind of bridge the gap," Jackson said. "You have The Sombrero here, The Paddlewheel down a couple blocks and a lot of business toward the river, but there was this dead zone here."

It was while she was looking at the building that it hit her: Downtown Burlington was without a doughnut shop.

"I remember growing up with Harold's Spudnuts. My mom and I would go to that little doughnut shop," Jackson said.

"Harold used to have a shop down here, and they used to have one on Roosevelt (Avenue), and then he eventually retired I guess."

Wanting to honor Harold Snicker's work and bring it back to life, she sought out and secured the recipe.

Their return has been welcomed with enthusiasm, and, due to a flood of pre-orders, Wake N' Bake for a time was running out of the popular breakfast item before they even opened up shop for the day. A new proofer Jackson purchased for the spudnuts, however, has allowed the restaurant to increase production.

"It's already been double what we thought it was going to be business-wise," Jackson said.

She wants to keep the menu fresh and plans to pepper in new dishes and specials whose inspirations come from foodie capitols throughout the U.S.

Though the restaurant has been serving up breakfast, brunch and lunch dishes, it will extend its hours this week for a trial run to 7 p.m.

Included on the dinner menu is a sweet and juicy burger stuffed between two donuts and topped with honey and schiracha candied bacon and a citrus marinated steak taco topped with feta cheese and mango avocado salsa. 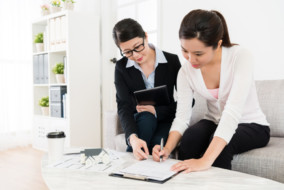 What To Expect — And Not Expect — When You’re A Mentor